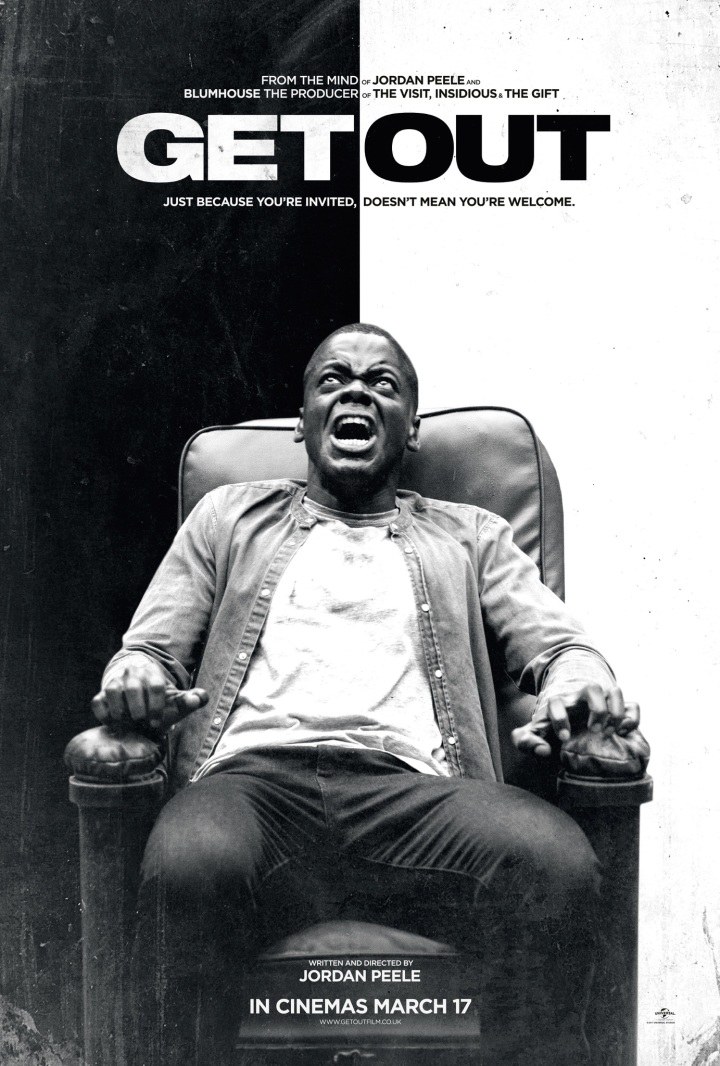 Sink into the floor. Sink.

Catherine Keener, Get Out.

Get Out is the story of Chris, a black man who is dating Rose, a white girl from a wealthy family. Chris and Rose plan a weekend to visit Rose’s family who live in a secluded house in upstate New York. As the weekend commences, Chris realizes that Rose’s family is not all they’re made out to be. This sentiment is only confirmed by the odd behavior of the black servants and people that Chris meets. As he becomes trapped in this strange world, Chris starts to realize that he might be in extreme danger and that if he doesn’t get out soon, it might cost him his life.

Get Out is a turning point in the horror genre. This film promoted the rise of the social thriller and for a good reason too. The focus of this film is implicit racism and the effects that this has on the psyche of a person. Chris is fairly confident in his dealings with previous white families that from the start the audience is made aware that Chris has had experiences with racism. This is shown by his insistence that Rose should’ve told her family about Chris’s race. Afterwards, the comments made regarding race are meant to make Chris feel more at ease, such as making comments about “voting for Obama for a third time”. These incorporations of comments regarding race in social settings contribute to the idea of it being a social thriller. These comments are used to further the idea that racism has dire effects on the victims of it, whether it be explicit of implicit. I found that turning this movie into a horror movie was very aptly done because it served to keep the audience on their toes while promoting Peele’s message.

In terms of plot, this is the kind of movie that is so much more fun the second time around. There are so many plot twists that make the movie much more plot driven rather than character driven. The second time, since you’re already aware of what’s going on, you tend to pay much more attention to the little clues that give it away. These clues are so well-done that you would think that this was the apex of the director’s career rather than the first film he’d done. Each line of dialogue appears to have a double meaning which becomes apparent to the viewer the second time around. This also makes the message more potent because the viewer is more aware of how these acts are racist because they’re more aware of the double meaning.

This isn’t your traditional horror film. While there are some scenes where Peele relies on jump scares, he tends to shy away from them, instead opting to use more subtle means of arousing discomfort.  The movie isn’t necessarily meant to scare you, but rather to make you uncomfortable and make you more aware of what is making you uncomfortable. Of course, the end is the typical bloody fight that you would expect from a movie such as Halloween, but this kind of end struggle is overshadowed by the final scene where Peele explicitly depicts the fear that a black person has towards the police. The look on Daniel Kaluuya’s face is enough to stick with the viewer for hours after watching.

The final thing that I want to commend about this movie is the acting. I’ve seen Daniel Kaluuya go from Skins to Black Panther to Get Out and his range is phenomenal. I’m not surprised that he was nominated for an Oscar for this movie. I also want to shout out Caleb Landry Jones (Jeremy) for effectively creeping me out by using typical white stereotypes and turning them sinister. Betty Gabriel (Georgina)’s face in the scene where Chris discusses being uncomfortable because he’s only surrounded by white people depicts not only the struggle to provide the correct answer but also the inner war between who she is shown to be and who she really is. This facial expression and its subsequent commentary (something that black people and any POC is used to facing) is very well done by her. Finally, Lil Rey Howery (Rod Williams) provided the perfect amount of comedic relief while still bringing attention to issues that are prevalent in the black community.

Overall, this is a movie that makes you think. It makes its audience aware of what’s going on in the world by utilizing different aspects of its plot and its characters. I think this is one of those movies that belongs on those “Movies to watch before you die” lists because this is a game-changing movie and deserves all the accolades that it received. Jordan Peele has truly created a masterpiece.

Processed with VSCO with e2 preset